Storage for the Long Haul: The Ultra Deck Plus, a truck camper bumper designed exclusively for Lance Truck Campers 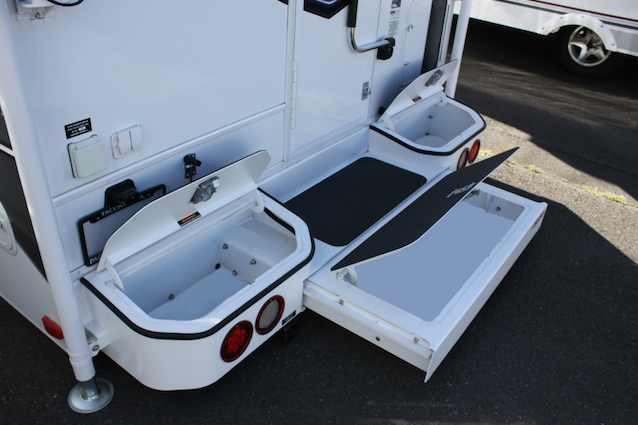 Transform the Journey with the Ultra Deck Plus
Have you ever caught yourself debating whether it’s more valuable to bring along your fishing gear or your ice chest on your next trip? If so, the Ultra Deck Plus bumper is the product for you. This compact truck camper bumper features a sleek contoured body style that gives specific models of Lance truck campers an additional 7.8 cubic feet of truck camper storage so you’ll never again need to agonize over that decision.

On either side of the deck, two spacious compartments provide deep storage for large items such as a cooler or a tackle box. Both compartments also have built in drains that make cleaning a breeze. The central deck features a sliding storage drawer that can support up to 600 pounds; it also comes with a standard truck camper swing step. 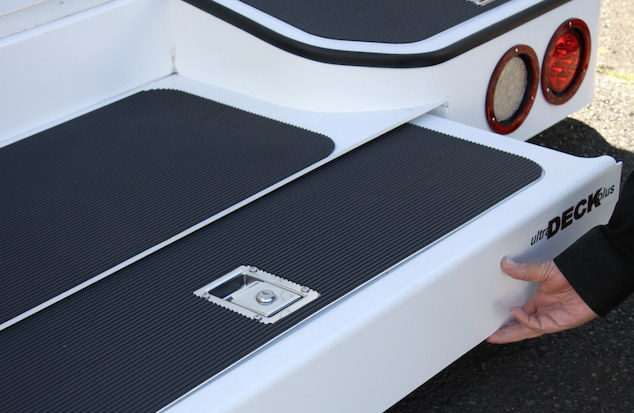 Ultra Deck Plus features slide-out porchOffered as an option the truck camper entry step system is designed to also incorporate Torklift International’s patent pending GlowStep technology and can be deployed from either the center, right, or left side making The Ultra Deck Plus bumper perfect for safe and easy side access critical with towing, especially when using a SuperTruss Extension.

With so many details, the Ultra Deck Plus is sure to dazzle. However, perhaps the best feature of all is that the bumper storage is lockable. Not only does the Ultra Deck Plus bumper allow you to bring all of your favorite gear with you, but it can also afford peace of mind about the safety of your items while you’re out exploring.

Check out the video below for more detail about the Ultra Deck Plus bumper, its lockable storage features, and its durable design:

Truck Camper Storage at its Finest
Engineered by Torklift International, the Ultra Deck Plus was specifically designed for Lance truck campers and is directly compatible with the following units:

Like all Torklift products, the Ultra Deck Plus bumper is proudly made in the USA from quality materials you can trust. It is built with aircraft grade aluminum and stainless steel, resulting in a light but durable truck camper bumper. High impact powder coating not only adds style to the Ultra Deck Plus bumper, but it also ensures extreme durability. Lockable storage compartments feature a unique hinge lock system exclusive to Torklift International designs. Finally, DOT certified LED lights are sealed and guaranteed never to leak — a promise backed by Lance Camper Manufacturing. 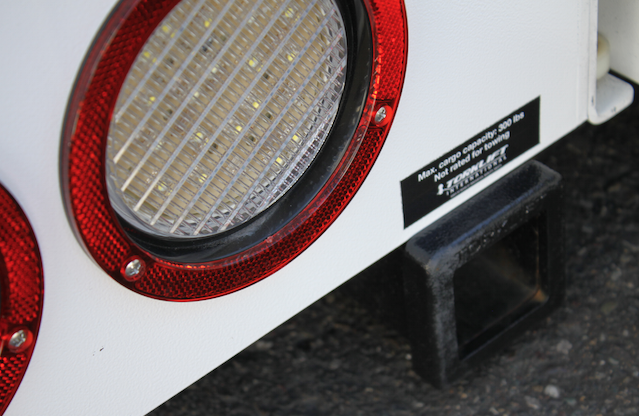 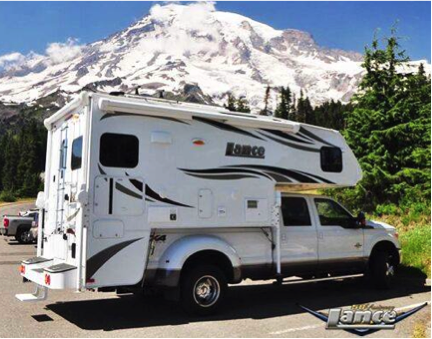 Photo Credit: Lance CampersWe are certain you’ll be impressed with the Ultra Deck Plus bumper, but we would like to know what you like best about it. What features stand out most? What would you like to add?

Are you ready to embark on your next adventure? Why not try the Ultra Deck Plus bumper for yourself? For information on how to order the Ultra Deck Plus, contact your local Lance dealer by visiting LanceCamper.com or call (661) 949-3322.

Written by Jenica Donahue:
Jenica holds a B.F.A. in Creative Writing from the University of North Carolina Wilmington. She is a freelance writer interested in blogging, copy writing and editing. She enjoys exploring new places and hiking in the Pacific Northwest. 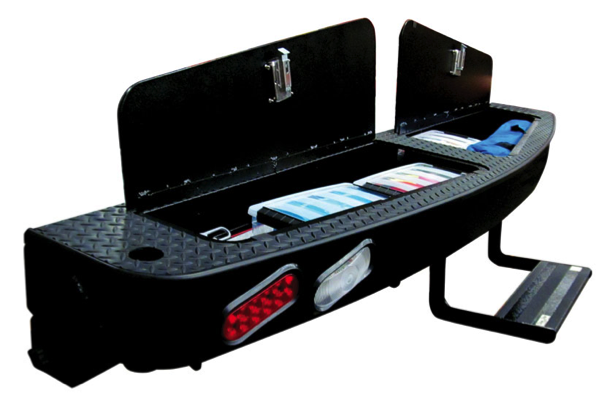 Palomino Landing Pad bumper storage compartments with Glow-in-the-dark swing step and LED lightsBy working with Palomino engineers and designers, Torklift took the truck camper bumper bull by the proverbial horns in 2013 and never let go. The Landing Pad bumper not only flaunts its versatility—being compatible with any year of the following Palomino truck camper models: 2902, 2910 and 2911—but also the quality and dependability you’d expect from being manufactured out of an aircraft grade aluminum body with stainless steel latches and fasteners.

As Palomino implied in our story featured by Truck Camper Magazine, the Landing Pad bumper is the aftermarket truck camper bumper equivalent to the Sistine Chapel ceiling – a Michaelangelo masterpiece. Here is a rundown of its key features:

o Despite the appearance of separate storage compartments, the Landing Pad bumper has a depth of 18.5 inches of “thru storage” so you can stow anything from lawn chairs to fishing poles securely

o Connect to the brake, reverse and tail lights for excellent rear visibility 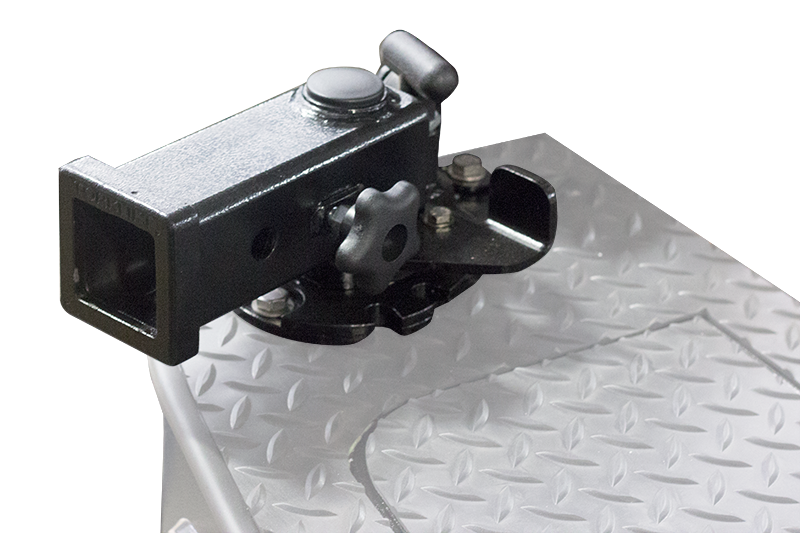 The Torklift Space Dock: made specifically to be mounted on the Palomino Landing Pad bumper
For those of you looking to further trick out your Palomino Landing Pad bumper, Torklift’s Space Dock and Lock and Load SideKick are the perfect accouterments. You can use them separately, but much like peanut butter and jelly, they complement each other so well that using them separately isn’t nearly as fulfilling.

The Space Dock easily mounts to the Palomino Landing Pad bumper and works with select Torklift International 2” x 2” receiver hitch accessories. Manufactured with high-grade steel and a powder coat finish, it incorporates an anti-rattle/movement feature to fully secure your chosen accessories. Most importantly however, is the fact that it works with the accessory: the Lock and Load SideKick maximum-security cargo tray.

Space Dock and Lock and Load SideKick with high security tamper proof puck lock shown swung out for generator useWith the Lock and Load SideKick, protect your generators from theft and avoid exhaust fumes and stains by permanently storing your generator while on the road or off the grid. It mounts to the Landing Pad bumper with the specially designed mounting arm adapter (sold separately) and fits nicely into the Space Dock’s 2” x 2” receiver port with a swivel receiver attachment—which swings out for generator use and swings in while in transport.

The Lock and Load SideKick further flaunts its versatility with the fact that its lockable generator tray measures 21.25” x 16.125” and is designed specifically to secure the following Palomino-approved truck camper generators: Honda Eu2000ia and the Yamaha EF2400iSHC and EF2000iS. Moreover, its ultra-lightweight design does not compromise its structural integrity, like the Landing Pad bumper it is manufactured out of aircraft grade aluminum and protected with a sleek hammertone powder coat finish.

Most importantly the Landing Pad bumper, Space Dock and Lock and Load SideKick are all manufactured here in the U.S.A. and come with Torklift’s Legendary Lifetime Warranty.

So whether you need a spacious, durable, porch-like bumper for your Palomino truck camper, are trying to accessorize with a swivel receiver attachment or secure your power source with a lockable generator tray, Torklift International has got your camper’s rear end covered with the Palomino Landing Pad bumper, Space Dock, and Lock and Load SideKick. Take the first step and order your Palomino Landing Pad bumper by contacting Forest River Inc. at 269-432-9791 ext 4. For more information on the SpaceDock swivel receiver accessory, click here.

Written by Jake Holley:
As a graduate from Western Washington University with a B.A. in Creative Writing, Jake Holley is an aspiring writer with a passion for language, philosophy and seeking out obscure films and literature. He is also an unabashed metal head and looks darn good in a suit.

Truck campers allow for towingWe all know truck campers are great. They combine the flexibility of a pick-up truck with the luxury of an RV, and you still have the option to tow almost anything. However, owners often struggle to find a truck camper entry step solution compatible with a hitch extension that allows a safe entry/exit of the truck camper while hooked up. Perhaps this is true for you as well. You find yourself either disconnecting the trailer entirely in order to use your rear truck camper entry steps or you use the hitch extension or trailer tongue as a step, which is an accident waiting to happen. If you have ever stayed up at night worrying that your mother-in-law is going to break an ankle trying to enter/exit the camper -- worry no more. Torklift International and Northwood Manufacturing have jointly developed a truck camper bumper that will finally let you rest at ease.

Last week, we gave a brief overview of some of our favorite aftermarket truck camper bumpers. Today, we want to highlight a product that is near and dear to our hearts—the Fox Landing bumper. This little beauty was engineered for safety and designed specifically for use with specific models of Arctic Fox truck campers. 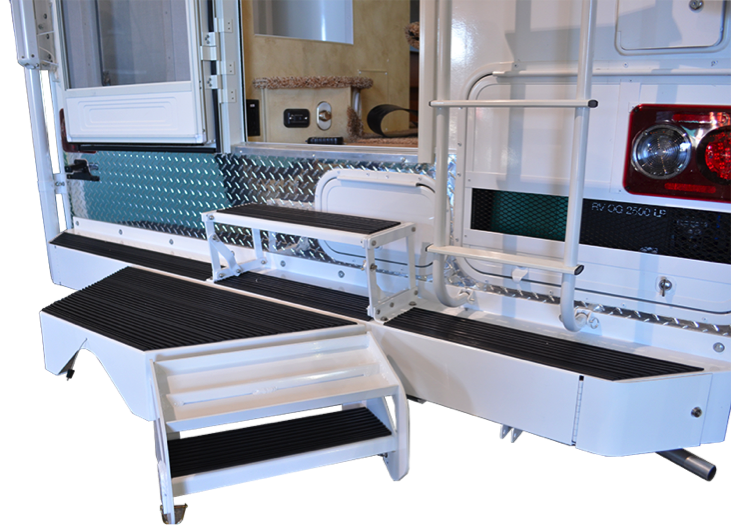 With its large entry platform and unique fold-away steps, the Fox Landing bumper is the perfect solution to a safe and convenient camper entry.

Not your average camper bumper
All truck camper bumpers were not created equal. Keeping in mind the safety concerns of our truck camper owners, engineers from Torklift International wanted the Fox Landing bumper to make entering and exiting the Arctic Fox truck camper quick and painless.

The Fox Landing camper bumper diverts your path around the trailer tongue and hitch extension with double steps off the side. The main platform has ample room, but it’s not so large as to alter the center of gravity for towing, which is best achieved when using a SuperTruss Extension. When the truck camper entry steps are not in use, they simply fold away and the platform secures in its stowed position. The whole process takes a matter of seconds.

You can’t beat the quality either. The truck camper swing steps are made from aircraft grade aluminum and stainless steel featuring GlowStep treads for additional safety. Each step is also the same height, which makes it less likely for a misstep. Never again will you need to worry about your mother-in-law borrowing your truck camper—unless you’re afraid she won’t bring it back.

Innovative design meeting practical needs
Doug Karr at the Northwood Manufacturing plant speaks about the inspiration behind the design:

“The biggest issue I had with people when I talked to them about my truck campers was [that] they were tired of stepping on the tongue of their trailers when they were hauling their boat or, you know, utility trailers, snowmobiles—that sort of thing.” – Doug Karr

The Fox Landing bumper was truly made with the consumer in mind, and every factor has been taken into consideration:

The Fox Landing can also be purchased with some additional accessories, including a basement camper step, porch landing, hinge step and left and/or right side step entry. 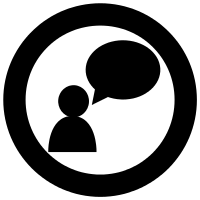 What are the specifications you value most? If you could have a custom-made camper bumper, what additional features would you like to see?

If you can’t think of anything to improve, we don’t blame you. To order a Fox Landing truck camper bumper please contact the Northwood Manufacturing parts department at 1-800-766-6274 or click here.

Written by Jenica Donahue:
Jenica holds a B.F.A. in Creative Writing from the University of North Carolina Wilmington. She is a freelance writer interested in blogging, copy writing and editing. She enjoys exploring new places and hiking in the Pacific Northwest.