It’s 9 o’clock at night. The once blazing campfire has been reduced to ashes and embers. An echo of the celebration that took place on your first night in the woods is still present. Confident in your abilities as an outdoorsman, you turn your attention to your truck camper and smile. From the well-lit interiors, you feel the warmth wash across your face as the sound of gentle humming from a loved one resonates in your ears. Content that you will spend the evening in the warmth and comfort of your camper, you step up to mount the truck camper entry steps — and immediately slip and fall backwards. Pain jets up and down your back and neck, which is now cold and wet. Suddenly, as if mocking you, the decrepit camper steps break away from your truck camper and land in the mud. As you glare at its inefficiency, you can’t help but wonder: Is this it? There has to be something better than this. 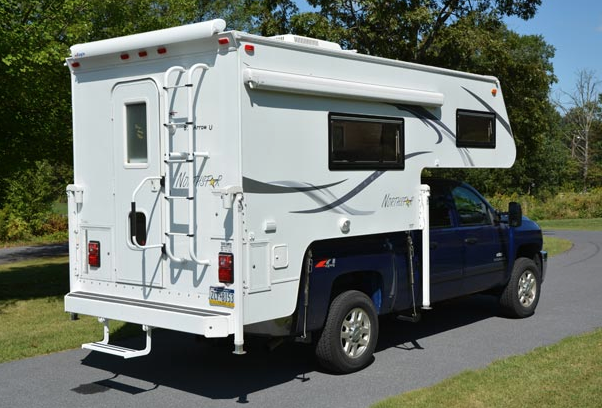 Northstar Bumper on the 2014 Northstar 8.5 Arrow UFrom Torklift International comes the Northstar camper bumper designed specifically for Northstar truck campers. Forged from lightweight, aircraft grade aluminum, this factory installed truck camper bumper uses a custom swing step and thick step treads to carry you gently into the warm embrace of your camper on any Northstar framing system. In addition, reinforced gussets support higher weight levels, providing an extra level of safety. Gone are the days of stepping into the unknown and risking possible injury. With the Northstar truck camper bumper, your safety is promised. Other features include RV sewer house storage that locks to protect your equipment, plus the ability to tow any trailer when using a SuperTruss Extension. Finally, the Northstar Camper Bumper comes with a legendary lifetime warranty, ensuring quality and protection in any situation. This product is a great aftermarket upgrade, meaning that available spare parts are only a phone call away. 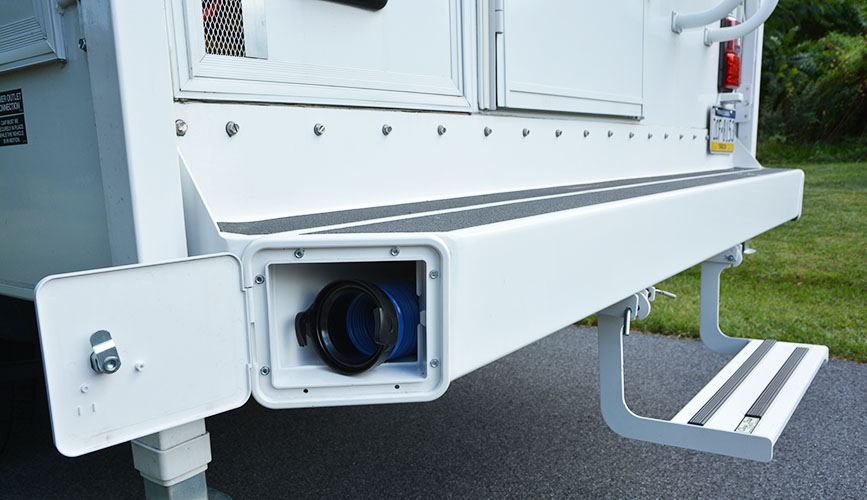 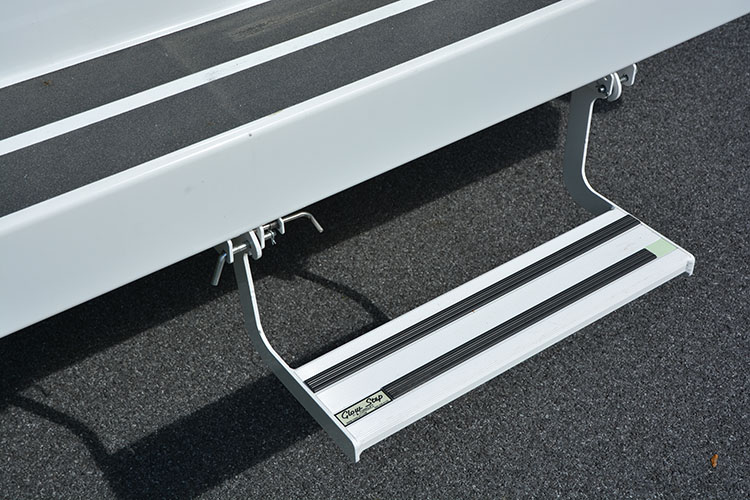 “Northstar’s aluminum bumper and Torklift International GlowStep flip-down step system is really fantastic.  When traveling, the GlowStep securely locks into position preventing the steps from moving during transport.  Upon arrival, the step is released by pulling a spring loaded latch on the inside left of the step hinge.  Entry into the camper is further aided by a large swing-out assist handle.”       – Truck Camper Magazine

Proudly made in the USA, the Northstar Camper Bumper is brought to you by the partnership of Torklift International and Northstar Manufacturing, better known as R.C. Willet Co., Inc.  Located on the corner of Leversee Road and Airline Highway in Waterloo, Iowa, the Willett family has been setting the standard for truck camper manufacturing as “The Truck Camper People.”

Founded by Ralph Willett in 1955, he and his son Robert Willett (also known as Chuck), took to building a business of manufacturing truck campers. From 1961 on, they have sold their Texson Campers to dealers across the country. Since the early 1980s, the reigns have been passed to Chuck’s son Rex, who has commanded the company with distinction. Surpassing their 54th anniversary, Rex has maintained Northstar’s continuous legacy of excellence and quality, using passed down knowledge along with continuously advancing technology to keep its competitive edge while improving the product.

Both Torklift and Northstar pride themselves on their rich history as family-owned companies, using both innovation and knowledge handed down through generations to perfect their craft. Each company has stood the test of time, building two powerful titans of manufacturing in the name of enhancing and evolving the RV industry.

Written by Andrew Wales:
Andrew is a recent graduate from the University of Washington, where he earned his B.A. in Arts, Media and Culture. In his free time, he channels his passion for writing into numerous projects, including the development of a series of full-length science fiction thriller novels. He seeks to put his devotion to writing to good use in the professional field as a technical writer.

Having nearly 25 years of experience with truck camping, Richard and Céline are no strangers to the truck camping lifestyle. However, this opportunity marked the first instance in which they’ve won a grand prize. It was probably just as much of a joy awarding the trip to them as it was for them to receive it!

From Quebec, Canada, Richard and Céline flew into Hartford, Connecticut to embark on their journey. The pair was warmly welcomed and transported to Truck Camper Warehouse in Chesterfield, where they met owner Bill Penney. Bill set them up with a 2014 Northstar 8.5 Arrow U camper and 2014 Ford F350 S/B Diesel. Torklift StableLoads, True Frame-Mounted Tie Downs, and FastGun turnbuckles were outfitted on the rig so the couple could enjoy a safe and memorable weeklong outing.

“The next truck camper I buy is going to be from Bill at Truck Camper Warehouse,” noted Richard. “He knows what people want and certainly knows his stuff when it comes to truck campers!”

Once they became familiar with their Northstar Camper and Torklift products, they took off toward Vermont and the White Mountains. From there, they spent the week exploring Mount Washington, Old Orchard Beach in Maine, and concluded at the popular vacation destination of Hampton Beach in New Hampshire.

“The highlight of the trip was Mount Washington. Even though it was cloudy, cold and a bit windy, it sure was an awesome experience,” explained Richard.

Throughout the week, Richard and Céline were able to experience their Northstar 8.5 Arrow U truck camper. “It was nice to be able to park the truck camper right in town and close to cars. With the camper and short bed truck, it’s almost like having only a truck with no load!” Richard recalled. “It’s so convenient for when you want to see something in the city. Everywhere a car can park, you can park!” Céline and Richard also explained the joy of having such large windows on the camper. “The space felt large because of the natural light streaming in,” said Richard.

We were eager to hear the couple’s feedback about the Torklift products. It turns out that Richard and Céline enjoy the use of their SuperHitch 17K, SuperTruss Extension and True Frame-Mounted Tie Downs on their truck at home.

Prior to purchasing Torklift’s True Frame-Mounted Tie Downs for his own truck, Richard hassled with finding a way to secure his camper safely to the frame of his vehicle. With the system prior to Torklift’s he felt the camper was backing off the truck.

“We felt more secure and a lot safer once the Torklift Tie Down system was installed,” Richard said. “The best feature of Tie Downs was that they bolted right onto the frame. The installation was so fast and easy - I had no issues with it fitting perfectly onto the truck.”

The Treasure Hunt vacation prize was the first time Richard and Céline had the opportunity to experience the StableLoad suspension upgrade. As an affordable alternative to airbags, the StableLoads pre-activate the factory suspension to prevent sag, sway and body roll while under heavy loads. After the trip concluded the couple was happy to report no side-to-side sway or poor handling issues with the camper loaded.

“It almost felt as if there wasn’t a camper on the truck,” Richard explained. “Even in areas on the road where we were driving fast on tight curves, the truck felt very safe and stable.”

The couple explained how they fell in love with the convenience of Torklift’s FastGun turnbuckle. “Something I had seen, but not used before were the Torklift FastGuns,” Richard noted. “Before I used it, I knew I wanted them -- but now I’m sure!”

With their current chain turnbuckle at home, it usually takes at least a half hour to remove the camper and is quite a chore for them. With Torklift’s FastGun, it’s quick-disconnect capabilities get the job done in about 10 minutes or less.

With the help of Bill Penney at Truck Camper Warehouse, Northstar Campers, and Torklift International, we were pleased to award the Treasure Hunt grand prize this year. To take a look at all the products Richard and Céline experienced visit Torklift.com or select the product below.

Check out Sue Jurf's reaction after we contacted her about winning her weeklong truck camping vacation through the Torklift Treasure Hunt!

Brought to you by Truck Camper Warehouse, Northstar Campers and Torklift International.

Congratulations, you and your guest will be partaking on a weeklong truck camping adventure this June!

As you read this, your new Northstar truck camper is being built at the plant in Iowa. From there, it will be delivered to Bill Penney at Truck Camper Warehouse in New Hampshire where it will be outfitted with the latest Torklift International gear including Torklift Tie Downs and FastGun turnbuckles.

We are going to fly you and your guest out to Truck Camper Warehouse where Bill Penney and his team will show you around your new camper and get you ready for your adventure. If there is something we learned about Bill and his team, they take the time to make sure you are comfortable with your truck and camper so you are prepared for your travels.

As part of the vacation, we will cover your airfare within the United States, pay for your campsite rentals and provide funds for groceries and fuel.

We look forward to getting in touch with you soon so that we can plan your camping destinations!

P.S. We assure you, this is not an April Fools Day joke!