My new Ford F150 shudders and I don’t know why

It has come to our attention that some Ford truck owners are experiencing a vibration issue when towing with their Ford truck. These complaints of a drivetrain related shudder seem to be happening with newer model F-150 trucks. As a suspension solution for towing, we’ve found that the Torklift International StableLoads have had success in alleviating this problem. 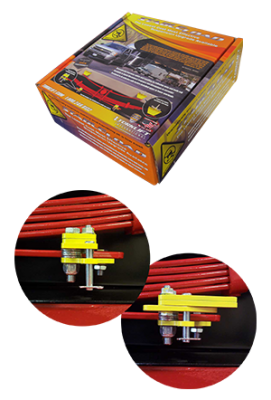 The Torklift StableLoads are tested and proven to solve multiple drivability issues. By pre-engaging the stronger factory overload leaf springs, StableLoads give added support to the suspension your truck was designed to have originally.

As the only product available designed with an on/off capability, the patented StableLoad suspension stabilizer enables you to switch the system off when necessary. When not towing or hauling, keeping the system off enables you to enjoy the smooth, factory ride. Engage the StableLoad, load your vehicle and continue to experience the same ride quality. No other suspension system has the versatility of this on/off function.

Several Ford truck applications do not require drilling and are easily installed. Also, the lifetime warranty that comes with the StableLoad extends to the factory installed leaf spring of your vehicle as an added bonus.

George Ruff installed the StableLoads on his 2013 Ford F-150 truck.

“I installed the StableLoads first to see if I would notice any difference with the shudder issue,” George said. “Well to my surprise, I would guess that about 80 percent to 90 percent of the shudder was gone!”

George also noticed the improvement in handling the StableLoads provided when towing his tractor on a landscape trailer with his Ford truck.

Owners of Ford trucks have indicated that the shudder worsens when towing. To address the vibration issue, Ford truck owner Terry Reeves of Team Beefcake Racing turned to the StableLoad suspension upgrade as a solution.

Terry installed both upper and lower StableLoad applications on his 2013 Ford F-350 to tow a 53-foot Outlaw trailer weighing in at about 26,500 pounds with car and gear. 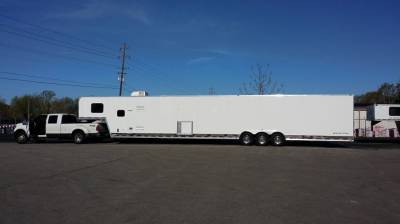 When Terry loaded the gooseneck trailer onto the truck, he immediately noticed that the sag in the rear of the truck was greatly reduced.

“I really wish I had measured the ride height before and after, because it was a substantial difference,” said Terry. “We ended up raising the gooseneck one more hole up and if I had to guess, I would say the truck is sitting somewhere between 5-7 inches taller.”

When Terry took the StableLoads for a test-drive, he wanted to maneuver both turning and straight ahead take offs to see if the Ford truck vibration was improved. With doubling the throttle he found that the shudder on the Ford truck was about 95 percent better.

Terry had initially purchased airbags, but now doesn’t see the need to install them on the truck. He found that the StableLoad suspension stabilizer addressed all of the Ford truck’s suspension problems for his application.

“On the highway, the truck definitely feels much more stable and you feel more confident driving the truck,” Terry explains. “For the cost and ease of install, this is a mod that is definitely well worth it for those that are towing and I highly recommend!”

If you are experiencing shudder or vibration when towing with a Ford truck, we suggest installing the StableLoad suspension upgrade. This easy, DIY suspension modification has shown that it can greatly reduce the vibration issues for newer Ford truck models.

Click here to learn more about Torklift International StableLoads or find your Ford truck suspension application on our application guide.

SuperHitch for Ford Trucks: Trailer hitches that are built for a Ford tough truck

What is the best aftermarket suspension for my truck?

What’s the secret to increasing the payload capacity of a truck?

Go on an epic roadtrip with your Torklift StableLoads